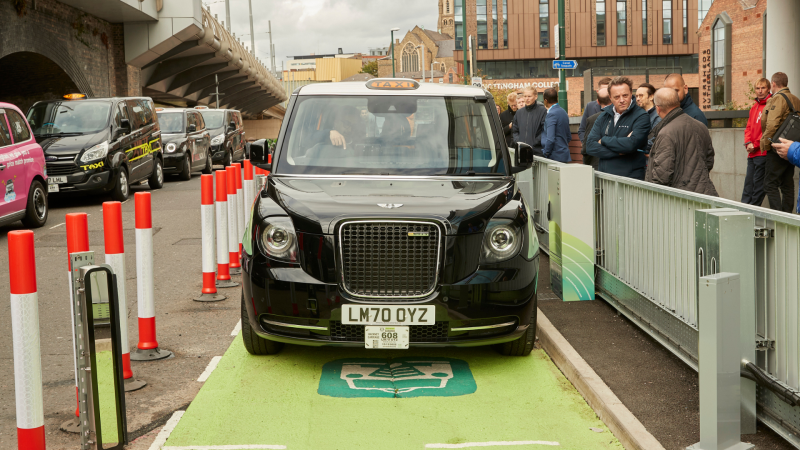 Cabbies in Nottingham can now wirelessly charge their electric taxis as part of a pioneering Government-backed trial which underlines the city’s ambitions to become the UK’s first carbon neutral city by 2028.

The groundbreaking scheme has seen nine electric hackney cabs retrofitted with the latest, super-efficient wireless charging technology to power local journeys. The public can use the trailblazing new taxis from this week, at a specially upgraded rank outside Nottingham Station.

Nineteen local taxi drivers have so far volunteered to test a free cab to help Nottingham City Council and its project partners closely monitor the trial and share learnings with the Government to help shape future regulations and delivery of wireless charging projects.

This project will help partners discover the advantages and issues of this technology and iron out any problems.

Wireless Charging of Electric Taxis (WiCET) is a £3.4 million project funded by the Office for Zero Emission Vehicles through Innovate UK to assess the commercial and technical viability of deploying wireless charging for electric hackney cabs.

The City Council secured £930,000 from the Government’s Office for Zero Emission Vehicles through Innovate UK for the WiCET project. This is a UK first involving both London Electric Vehicle Company (LEVC) and Nissan Dynamo electric taxis, placing Nottingham at the forefront of green technology innovation.

It is expected that the trial of the wireless charging technology will demonstrate a range of benefits, including:

“This is another example of Nottingham leading the way in transport innovation, as we lead the country to become carbon neutral by 2028.”

“Wireless charging has the potential for effective deployment across a wide range of applications from public transport to emergency vehicles and mobility solutions, and the results from our research will go on to inform future deployments.

“We are extremely proud to be starting the first physical trial of Wireless Charging of taxis in the UK here in Nottingham. This is a big step in understanding and demonstrating the potential of wireless charging as a core technology in the Electric Vehicle transition.

“Everyone involved in the project has worked hard behind the scenes to get us to this point, and I’m excited to see the impacts this will have for drivers, passengers and the environment.”.

The wireless taxi project is another example of Nottingham being at the forefront of new technologies and forms of transport – its launch coming in the same week that Nottingham announced an incredible 57% drop in carbon dioxide emissions since 2005.

The Council’s Future Transport Zone Programme is overseeing several projects, including the e-scooter rental trial, sharing fleet vehicle charge point infrastructure with other local councils lo and piloting new ‘mobility hubs’ which will bring different forms of transport together alongside public realm improvements in residential areas. The city also boasts an extensive tram network powered by green electricity, while 30% of the city’s buses are either electric or run on biogas.