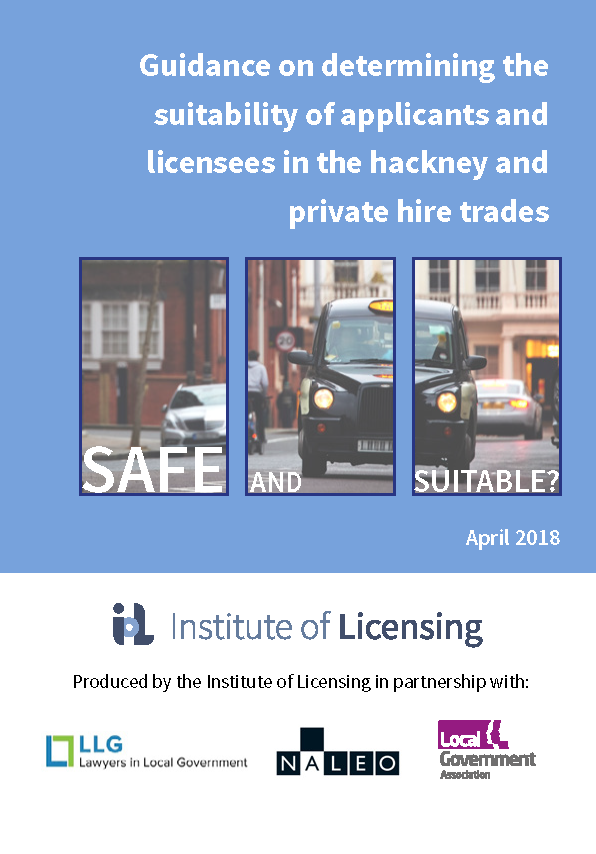 Institute of Licensing’s Guidance on determining suitability of applicants and licensees in the hackney and private hire trades. Published Date: 06/02/2020

The Institute of Licensing (IoL) published its ‘Guidance on determining the suitability of applicants and licensees in the hackney and private hire trades’ in April 2018.  The document was produced by a working party commissioned by the IoL, in recognition that in the absence of any recent Statutory or Ministerial Guidance, decision making across the country was inconsistent, leading to licence shopping where drivers refused licences in one area may subsequently be granted a licence in another area.  The intention of the IoL’s guidance was to provide licensing authorities with a national set of standards which they could then consider using as a basis for their own local policies, and in doing so provide a more consistent approach across the country.  The Guidance was produced in partnership with the Local Government Association (LGA), National Association of Licensing and Enforcement Officers (NALEO) and Lawyers in Local Government (LLG).

The IoL recognises that the vast majority of the licensed trade are law abiding members of the public who provide an excellent, safe and valued service. The guidance is there for those few cases where an applicant fails to meet the standards the IoL believe the public deserves and expects and (if used as the basis for their own policy) gives the licensing authority the support to take appropriate action.

Since April 2018, there has been a steady take up of the guidance by licensing authorities.  It is also attracting criticism from within the taxi industry (including most recently in the February edition of  PHTM)  with some describing it as ‘draconian’.The main concern seems directed at the standards suggested in relation to motoring matters and the number of penalty points on a drivers DVLA driving licence. There is also a further concern being expressed. The IoL Guidance suggests using the expression “a safe and suitable person” as a way of explaining what is meant by the older phrase of “a fit and proper person”. This is not intended to alter the law: merely to provide a 21st Century interpretation of a 19th Century legislative phrase, which is enshrined in 1970’s taxi legislation.

Critics argue that it is easy for taxi drivers to collect points on their licences as they drive more miles than the average driver, or they face pressure from late or intimidating passengers.  These arguments are unlikely to stand up in the case of an accident or injury (fatal or otherwise) as a result of speeding.  Taxi drivers are professional drivers.  Their driving should be of a higher standard than domestic motorists: a professional driver should know their speed with minimal reference to a speedometer; will recognise hazards and driving conditions and adapt their driving accordingly. These drivers will not fall short of the standards in the IoL document. The IoL believe these are the standards the public should rightly expect of the taxi industry.

In addition, it should be recognised that for a first speeding offence, a speed awareness course is usually offered which will not result in penalty points. It would then take two further speeding offences before six points were obtained and a fourth before the number on the DVLA licence exceeded seven (the limit suggested in the IoL’s guidance).  Other common reasons for penalty points to be imposed on a driving licence, include bald tyres and no insurance which again are offences which should never be committed by a professional driver.

A recent FOI request to the DVLA asked about the percentage of drivers allowed to drive a motor vehicle of any class that have seven points or more on their driving licence (on any date or period in 2019).  The response from the DVLA states:

On that basis, is it really ‘draconian’ to expect our professional taxi and private hire drivers to not fall within 0.27% of licensed drivers when it comes to their driving standards?  The public have a right to expect more than that.

Each application, or review of a taxi or private hire drivers’ licence must be considered on its own merits by the relevant licensing authority, using their policy as a guideline. As part of that process, any applicant falling foul of the policy will have the opportunity to make representations as to why the action suggested in the guidelines should not be taken. The IoL accept there will be cases where there is good mitigation and it will be for the licensing authority to consider whether the circumstances warrant an exception from the policy.

The IoL guidance is not draconian – far from it.  The guidance sets out standards which are proportionate and necessary in order to protect the public from the very small minority of applicants who fail to meet the required standards.