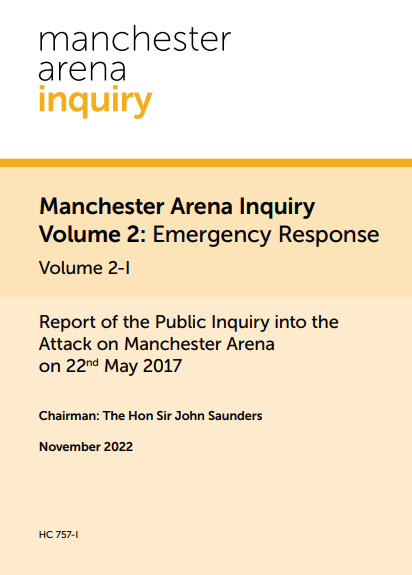 The Manchester Arena Inquiry, a statutory public inquiry, was established by the then Home Secretary in 2019 to investigate the deaths of the victims of the attack on the Arena on 22 May 2017.

It is chaired by the Hon Sir John Saunders.

This report sets out the chair’s findings and recommendations on the emergency response to the attack.  Sir John lpays tribute to 'heroic acts by numerous people.  These were members of the public who were in or around the Arena; people who worked at the Arena or in the Victoria Exchange Complex; and members
of the emergency services who went into the City Room in the early stages. These people ignored the risks to their own safety to try to do what they could to help the dying and the injured.'

The report goes on to focus on determining what went wrong and why things went wrong, and making
recommendations to try to ensure that they do not go wrong again.  The report states that 'a great deal went wrong in the emergency response to the Attack on 22nd May 2017'.

This report has been laid before Parliament.

Volume 1 of the Inquiry’s independent report was published in 2021.