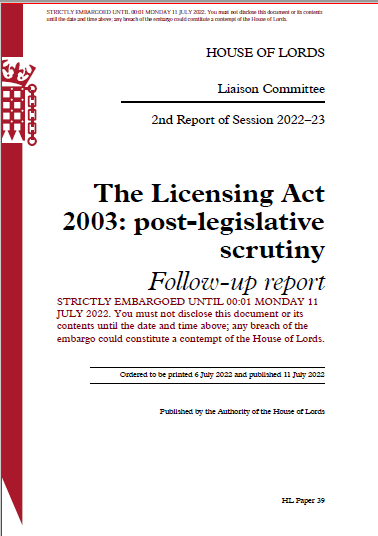 In the Liaison Committee’s report, Review of House of Lords Investigative and Scrutiny Committees: towards a new thematic committee structure, published in July 2019, the Committee recommended that the Liaison Committee (on a case by case basis) could hold follow-up evidence sessions on a former special inquiry committee’s recommendations, followed by the publication of a report. This is the sixth occasion on which this new procedure has been utilised.

The Committee found that more needs to be done to ensure the licensing system is operating as efficiently and effectively as possible. The Committee recommended:

Baroness McIntosh of Pickering, who was Chair of the Select Committee on the Licensing Act 2003, commented:

“Our original inquiry concluded that the Licensing Act 2003 was fundamentally flawed and needed a radical overhaul. It is now five years since we published our findings and we have not seen the progress we had hoped.

We urge the Government to review our conclusions and recommendations and act now to tackle the issues that remain unresolved.”