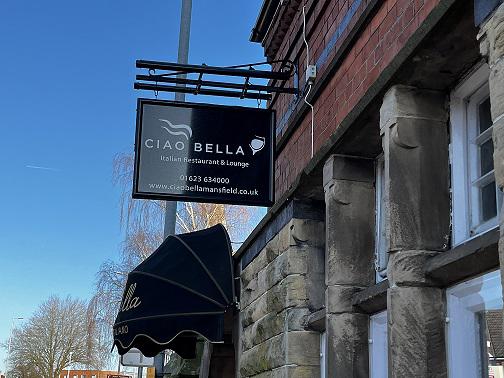 A town centre restaurant has had its licence modified after selling alcohol to underage customers.

A Mansfield District Council licensing hearing on Monday 23 January decided to modify the conditions of the current premises licence to make them more robust and to add new conditions that a door supervisor and personal licence holder be on site on specified days and times. The hearing panel also decided to issue a warning to the premise licence holder.

It was concluded that the police’s request to suspend Ciao Bella's Sale of Alcohol by Retail licence, located in Nottingham Road, for up to three months “would not be a proportionate approach”. These new conditions also apply to its neighbouring venue Ciao Bella Lounge, as both premises are operated under the same licence.

The Italian restaurant's premise licence holder, Tamer Abouelela, faced the hearing after failing two test purchase operations. The panel was told that police notified businesses in the town centre that test purchases would be carried out in the area.

These operations, organised by the police in September and November, resulted in alcohol being sold to two 15-year-old girls, accompanied by two plain clothed police officers, without staff asking the customers who look under the age of 25 for age ID. This is contrary to a "Challenge 25" policy for licensed premises in Nottinghamshire. The premise was issued a written warning and fixed penalty notice on both occasions.

Members also heard a 17-year-old served the underage customers on one of the occasions with beverages, which is not illegal. However, the server must seek advice from someone over 18. The panel heard that there was “no evidence this took place”.

The hearing was told that the test purchases had highlighted poor control measures. The police said they had “no confidence in the management” of the venue and that it had consistently failed to meet licensing objectives despite support and advice being given on numerous occasions.

Councillor Marion Bradshaw, Portfolio Holder for Safer Communities, Housing and Wellbeing, said: “Creating a safe town centre for people to enjoy has always been a key priority for the council and is part of our aspiration for the district to be a vibrant and confident place.

“We have a duty to keep people safe in venues and ensure good standards of compliance for visitors to those places too.

“I hope the conclusion of this hearing will demonstrate to residents the council will always work with partners across the district to ensure the delivery of these good standards remains a top priority.”

The panel heard Ciao Bella currently has 18 members of staff at the establishment, and “Mr Abouelela personally ensures and trains new starters at the venue surrounding serving alcohol to customers”. It was also heard the log book of Challenge 25 incidents was over 30 pages long with multiple entries from staff, and on average, “12 refusals a month were taking place upon ID checks by staff.”

Also, the panel heard that this venue had never had a review of its licence before since it began operations in 2015.

The panel members were told that following the first failed test purchase senior staff members were enrolled in external training. It was heard that Mr Abouelela has also engaged with a third-party test company that will undertake 14 test purchases in a 12-month period. The first two have already been completed and passed on both occasions this year.

Inspector Kylie Davies, of Nottinghamshire Police, added: “Licensing laws are in place to protect children from harm and they must be respected.

"To ensure local compliance with the rules we regularly conduct test purchase operations of this nature. Sadly, we have identified consistent failings at this venue and the time has now come to take decisive action.”