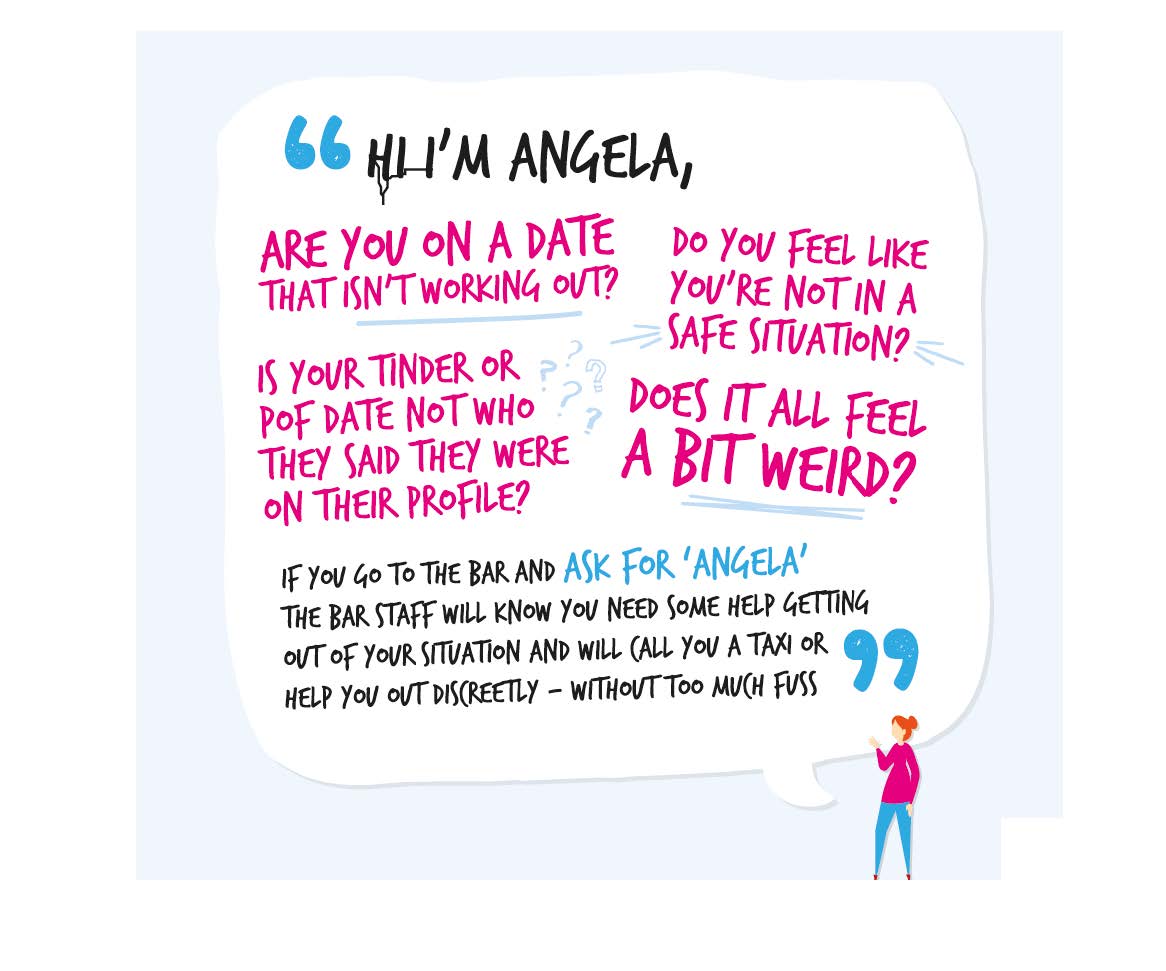 The ‘Ask for Angela’ initiative is being rolled out to bars, clubs and other licensed businesses across the whole of London, including in the City of London. The scheme aims to reduce violence, sexual violence and vulnerability by providing customers with a phrase they can use to get the attention of staff if they feel unsafe or uncomfortable. Staff can help by reuniting them with a friend, finding a taxi, or by calling venue security and/or the police.

The City of London Police, City of London Corporation and Metropolitan Police Service are working in partnership with Safer Sounds, who are part of the Safer Business Network, and licensed venues to help keep people safe while in the City of London.

Many of the City’s bars, clubs and other licensed businesses are getting busier and will continue to do so in the lead up to Christmas. For many people, this could be the first time they have been to a licensed premises during the festive period in two years, due to the pandemic.

“Protecting the public and keeping people safe is our number one priority. This initiative working with local licensed premises helps to ensure people aren’t alone if they find themselves in a situation they aren’t comfortable with.

“Ask for Angela is a simple, yet effective scheme which empowers people to seek help if they are feeling vulnerable in a pub, club or restaurant.

“They can raise their concerns with the venue staff in the knowledge that help is available.

“With online dating, there is a risk of meeting up with someone who may be a very different person to the one originally portrayed.

“We hope this initiative will safeguard people who are feeling vulnerable and prevent uncomfortable situations escalating into something more serious.”

Venues that support Ask for Angela will also have been given or offered Welfare and Vulnerability Engagement (WAVE) training. Delivered by Safer Sounds, it is a package developed to provide staff working in licensed venues with an awareness of vulnerability, how to spot it, and their responsibilities of how they can deal with it. Following completion of the training, venues will receive ‘Ask for Angela’ promotional materials such as posters and digital adverts to display in their premises. You can visit www.safersounds.org.uk/wave to find out more.

“I am absolutely delighted that the Ask for Angela safety scheme is being taken up by so many clubs and bars throughout London.

“The Met stands together with City of London policing partners, Safer Sounds – part of the Safer Business Network, and licensed venues across London to prevent and reduce sexual violence and vulnerability against anyone in such social establishments.

“The Ask for Angela scheme is a key part of our commitment to help improve safety for women and girls, although ‘Ask for Angela’ is for anyone who needs to use it. No one should have to put up with unwanted attention, or predatory, sexual or violent behaviour while enjoying a night out.”

“Our priority is to help make sure that people in the City are safe and feel safe. And a vital part of this is people knowing if they do not feel safe for any reason, there are ways they can raise concerns in a safe way and without drawing unwanted attention to themselves.

“Sexual violence and threatening behaviour have a devastating and lasting impact on individuals, families, and communities and have no place in our society.

“That is why this campaign is so important and we are fully committed to working with licensed premises to ensure its success.”

“What is clear from the work that Safer Sounds does with licensed premises is that businesses want to tackle vulnerability head on, but staff can be unsure of how to identify a vulnerable person and make an appropriate intervention. Venues who sign up to our WAVE programme ensure their staff are trained and empowered to actively assist customers in trouble and thereby prevent and reduce violent and sexual offences from taking place.

“Our revitalisation of Ask for Angela shows that sexual harassment and assaults will not be tolerated in London’s venues. By providing assets for social media, we are encouraging conversations about acceptable behaviour that will have a positive impact on the safety of those who visit licensed premises.

“Safer Sounds is committed to being a voice for business on this important issue and to working with the police, Mayor’s Office and councils to ensure that vulnerability is tackled in partnership with venues.”